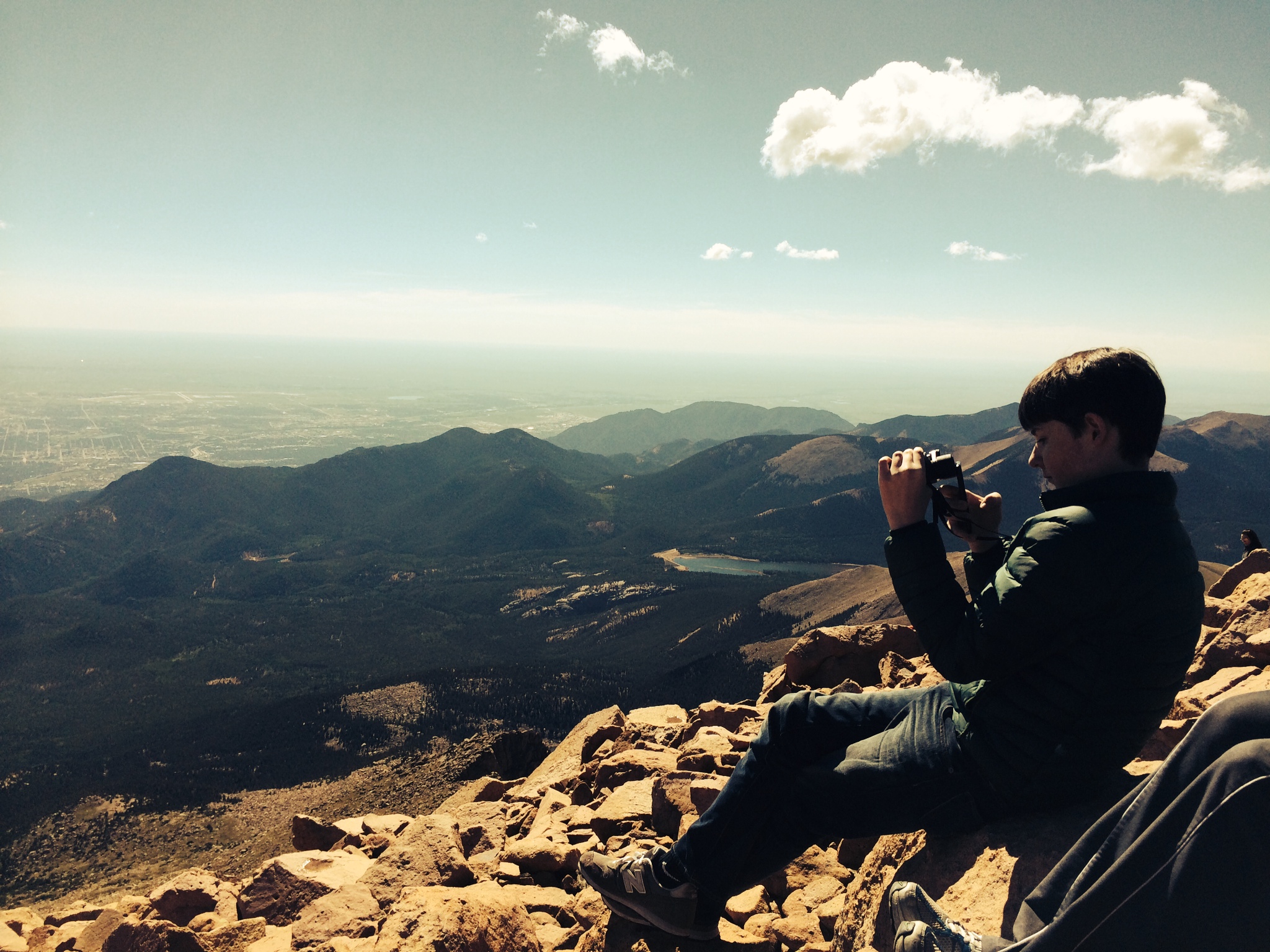 “Well, I went to a small college called Middlebury—do you know it?” The youngish man in the middle row of the shuttle van was engaging the whole group of 10 weary runners. Among them sat Rich- flanked by Will and me. We were descending Pikes Peak Pass.  His laugh was exactly like that of Nick Shallow’s—a Vermont native and Robbie’s roommate/best friend at Dartmouth.  His laugh mirrored Nick’s so much so that when I later found out that his wife was from Vermont, I wondered if perhaps she had imported that contagious laugh with her and infected her Colorado native of a husband with it.  He went on to self-deprecate, “and I just got one of those worthless liberal arts majors while I was there—environmental studies.” Then the laugh.

Two hours before, I had just dipped my big toe into extreme sports for the first time. I had ridden the edges of physical law as my spidey senses had battled the promise I had made to show up at the finish line of the Pikes Peak Ascent. The Pikes Peak Ascent is a grueling run up one of CONUS’s tallest peaks and Colorado’s proudest 14er. Every fiber of my being had beckoned me to stop.  But I was the one who had been assigned the task of driving the Honda up the Pikes Peak Toll Road to cart Rich home after his 3 hour and 17 minute race up the mountain.  I’m certain that the runners in the Pikes Peak Ascent earn their stripes, but I’m proud to be one of the unsung heroes who has made it up that terrifying toll road in a car to the parking lot where all spectators meet and hop on the shuttle to the summit. As I drove, my legs were trembling so badly that I had to face the possibility that one last fatal twitch of my right foot might cascade us over the 3 inch shoulder and down the 7000 foot cliff towards Manitou Springs.  I believe that had Will not been in the passenger seat, I would have run off the road.  I think the only thing that saved us both was my maternal instinct.

I’m not sure my trek up the mountain in the Honda is relevant, but somehow it sets the stage for the headiness of the day.  At the top, Rich appeared as always, Old Faithful, a dot at first winding his way through the final ¼ mile of the racecourse.  True to form, he gracefully crossed the line bringing home a spectacular finish.  We walked around for a few minutes and headed to the line to catch the shuttle van to take us back to the parking lot—which still sits at an altitude of 11,000 feet.  It was on the shuttle bus that we met Dave Philipps, the Middlebury graduate, who unabashedly derided his liberal arts degree to a group of strangers.  I think maybe he was just being humble, and certainly he was being funny, but it definitely surprised me to hear him declare the uselessness of his Middlebury Bachelor of Arts degree.

As luck had it on this unfolding day, Dave Philipps needed a lift down from the parking lot to where he had parked at the start of the race.  We gladly offered, despite Will’s stealthily texting me, “Is he a hitch hiker, MOM???” It turns out Dave had supplemented his liberal arts degree with a Master’s in journalism at Columbia.  He shared that in two weeks he’d be moving his young family to New York, where he has just accepted a job with the NY Times.  Rich asked him how he had landed such a plumb job.  Imagine my surprise upon hearing his response, “I won a Pulitzer Prize this past year.”

My thoughts.  Well, I don’t know this man’s journey.  And I’m sure that that Master’s degree from Columbia in journalism was hard won and enlightening as well.  But I’m still pretty certain that a broad based education that is offered at a fine liberal arts college like Middlebury lays the foundation for someone like Dave Philipps to be smart enough and insightful enough to write the article that won him the most prestigious journalism award in the world.  Isn’t it funny—he downplayed his liberal arts degree, yet he won a Pulitzer Prize before he turned 35.  Somehow I regretted that he neglected the chance to plug his liberal arts degree—he surely has the credentials to do that.  Admittedly it’s very likely I’m extrapolating his meaning because it’s certain he didn’t expect some homegrown blogger to quote him, and I never gave him the chance to explain what he meant.  But I couldn’t resist the chance to point out the obvious about a liberal arts degree from Middlebury.  I’m not sure what other kind of degree could prepare a student for more success than he has earned.  I Googled him as soon as he left our car.  Turns out he’s not only brilliant, but humble as well.  He not only won a Pulitzer Prize, (Other than Honorable, http://cdn.csgazette.biz/soldiers/) he was also nominated for another in 2010.  He’s also a published author (Lethal Warriors, http://www.amazon.com/Lethal-Warriors-When-Band-Brothers/dp/0230120695.)

About the title of my story:  Dave Philipps told us a funny story.  When he told his 5 year old that he had won a Pulitzer Prize, his son responded, “What did you have to pull to win the  SURPRISE?”

In the photo accompanying this story is Will, scanning the mountain for his dot of a dad.